We had initially kept this day as a free day to recuperate from the journey till now. None of us wanted to mount the bikes and were all in the mood to actually walk and explore Leh. But, of course, laziness took over and apart from the walk till German bakery for breakfast in the morning , we rode to all the other places we visited, which was good ’cause otherwise we wouldn’t have ventured as far as we did.

After a nice and heavy breakfast, we went for a little shopping in the market. The Leh market is filled with fake chinese clothes and shoes. For some reason, everything seemed more expensive than what we were used to and some of the shopkeepers even downright refused to tell us their prices saying that we won’t be able to afford their wares ! Guess, they were more used to the firangs walking around the streets and willing to pay a premium for the substandard goods on display.

The shopkeepers aside, Leh seemed like a very calm place with a nice and friendly people.

Since, we didn’t have much to do in Leh, we decided to explore some of the monestaries outside Leh and asked some taxi drivers for the fare. Surprisingly, the fare they were asking for a half day trip sounded much more than what a full day tour would cost. I guess, they’ve also been spoilt by the rich foreigners that tend to visit Leh.

Anyway, we ditched the taxi idea and took out our bikes and went for some sightseeing of our own. The first stop was Shanti Stupa, overlooking Leh city, built with the help of the Japanese government and dedicated to piece. After seeing all the ruins around Leh, this memorial was a welcome change. 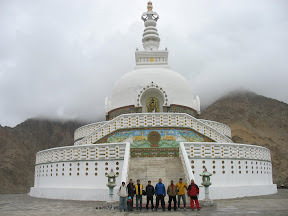 After this we went to see the Thiksey monestary outside Leh. This was about 15-20 kms from Leh and even though it had started drizzling now, we still decided to take our chances, and since we didn’t have any other day free, we had to do this sightseeing thing today only.

The monestary itself was amazing but even more beautiful was its location. 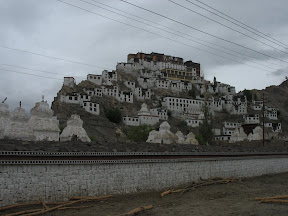 The monestary had a lot of old scriptures and a three story high budha statue in the main prayer hall. The climb to the top though was a pain and something we could have done without. Now, where are those escalators when you need ’em 😉

This is the view from the top of the monestary. 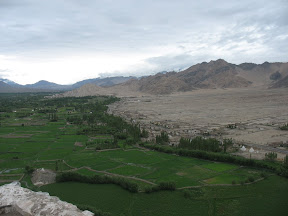 After this we went to see the Shey palace. The palace itself looked pretty run down and a lot of restoration work was on at the time. After spending some time there, we all went back to Leh with a stop at the mechanic to get our bikes checked up. The mech’s verdict: No problem with the bikes, which we already knew 🙂

The evening was spent at a nice restaurant serving north indian food and booze. We went to bed excited about the next days trip to Khargund La, the highest motorable pass in the world.