A trip to the highest motorable road in the world. This is what we had been riding the last 9 days for. Granted Pangong Tso was spectacular and offered a much better view, but you can’t take the brownie points away from a ride like todays.

Apjoo had taken permits for the Nubra valley for all of us and most of the group was actually planning to spend the night at hunder or diksit after crossing over Khardung La. I wasn’t too interested and wanted a rest day for myself. It had been raining the whole of yesterday and last night was also pretty cold. But we didn’t realise that it could have snowed at Khardung La and because everyone else wanted to go further to Nubra, we all started early. Which was a bad thing ! It was freakin’ cold and within a few kms of the ascent to K’La, we had to stop and warm our hands on the bike’s engine. The gloves were of no use at all. 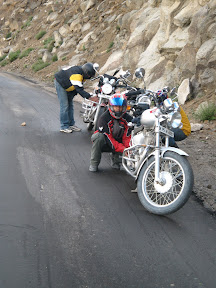 When we finally reached South Pullu, the southern checkpoint for access to K’La, we were told that Khardung La is closed and no one was being allowed to pass through. We were quite disappointed but decided to stick around in case the J & K police personal changed their mind. In the meantime, we went to the Army checkpost to ask them about the situation. They invited us inside their shelter and offered tea, which we refused, but accepted their offer to sit in front of the fire and warm our hands a bit. God bless the Army 🙂

They advised us to stay for a little while and wait till the sun comes out. To our relief, that wasn’t too long and once the weather cleared up, and the once batch of stuck vehicles came down from the pass, they allowed us to pass through. The first couple of kms were fine but it started getting tough after that. The road was bad and we started getting snow, first on the sides of the road, then on the road and finally snow which had frozen to ice on the road. Anyone who has ever ridden a bike on snow would know how difficult it is to control a bike on ice, and none of us had any experience with that. We still managed to tread along slowly, till we were stopped by a couple of tourist vehicles heading up.

They told us that the road ahead had hard ice and even their vehicles were having difficulty in driving, so we should also probably wait for the ice to melt, since by now the sun was out in its full glory. We didn’t have much time to wait though, so we still decided to move on slowly. It was clear that we won’t be able to do this alone, so we helped push each others bike over this stretch. It was quite tough but we somehow managed and since we had broken the ice sheet, the rest of the vehicles also could pass now 🙂

We finally did manage to reach the top with just a couple of minor slips 🙂 And man what a feeling it was. There was hardly any oxygen to breathe but all that was a distant thought now. We had finally completed the journey and were quite elated. The usual photo sessions took place. 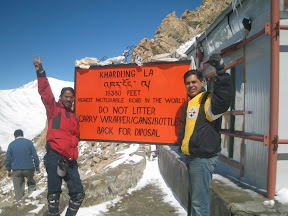 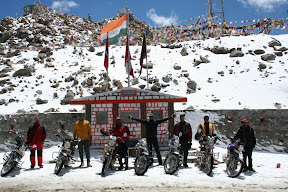 Everyone had dropped the idea of doing Nubra as soon as we’d heard about the other riders who got stuck at Khardung La the other day because of the bad weather, and so we spent almost two hours at the top and then proceeded back to Leh. The ride back to Leh was pretty uneventful. The ice on the road had almost melted away and it was easier to drive on the way back.