Our journey to Leh was finally coming to an end and none of us were in the mood to go back to civilisation. I wish we could have stayed there for a couple of more months, if not days. We had to get petrol filled in the bikes and so there was no point getting up early and then wait for the gas station to open. We slept well, got up, got ready, tied up our bikes and went to get fuel filled. Pandey and Akhilesh were late as usual and we told them that we’ll meet them at the gas station.

They were taking a long time and we got tired of waiting for them and so we called them and told them to reach the pathar sahab gurudwara that we were supposed to stop at. Pathar sahab is about 30 kms from Leh and is believed to be the place where guru nanak meditated while in Leh. A demon had thrown a big rock on the guru from a nearby hill while the guru was meditating. The rock on touching the guru melted and the shape of the guru’s back can still be seen embedded in the rock at the gurudwara. The place is now maintained by the Indian Army. 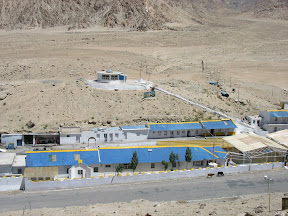 Pandey had still not reached and after an hour or two Sandhu called up Akhilesh who told him that Pandey had met with a small accident while getting out of Leh and was at the local dispensary. Sandhu then rushed back to Leh while Amar, Joshi, Apjoo and I waited at the gurudwara for them to return. Fortunately the injury wasn’t much but his bike’s fork had bent and that had to be repaired. So, while Sandhu and Pandey got his bike repaired, the rest of us decided to go a little further and catch up with them around lunch at a small place called Nimu.

Sandhu and Pandey finally caught up with us at Nimu, not because they were fast, but because we had an extended lunch of momos and thukpas at the a small but functional shopping complex at Nimu. After that it was a mostly smooth drive till the Lamayuru village where we stopped to have a look at the monestary.

Lamayuru is a small village with a monestary which is more than a 1000 years old and a visual delight. The village is set amidst moonscape with the lamayuru gompa looking over the village and its well being. 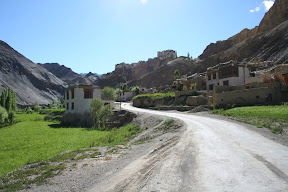 We should have known that the day was jinxed for us when Pandey had the small mishap. But, after havind ridden for over 1500kms we weren’t that bright. While negotiating a small turn for the Lamayuru monestary, Amar’s bike slipped and when he got up, he realised that his tyre has a puncture. While we had a spare tube and an air pump with us, the tools to open the tyre were with Apjoo who having seen the monestary before us, had already left. So, Amar, Joshi and I were left with a punctured tyre and no mechanic in site for miles. We came to the conclusion that the only way to move ahead was to fill the tyre with air every few kms and try and reach some place where there is a mechanic to fix the puncture.

We managed to go on like this for about 10-20 kms but didn’t find any mechanic and when we did find one at a place which looked like a popular stop for truck drivers, the mechanice had gone on leave or something.

We finally met up with the rest of the group and stopped at Fotula top for a photo op 🙂 Fotula top is the highest point on the srinagar Leh highway and a pretty lonely place. There was no one in sight for miles and our only hope was to reach a village or some kind of settlement before the sun sets and forget about reaching Kargil today. 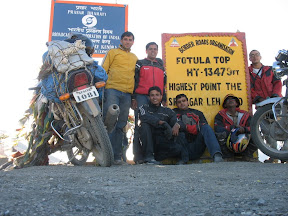 Fortunately, we found a tyre puncture repair shop in a small village, whose name I can’t remember right now. The people at the village were quite friendly and even though the mechanic had never repaired a motorcycle puncture before, he used our tools and helped us put the new tube in the tyre. 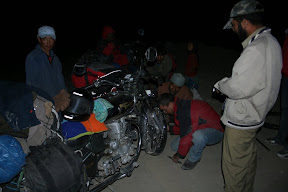 We finally got the tyre fixed at about 8 at night with the help of the friendly locals. We now had two options before us. Either, spend the night at the village guest house or risk riding at night and try and reach kargil. We were told that kargil was about 100 kms or so from this place and since the weather was quite lovely, we decided to take our chances.

In retrospect, it was probably a bad decision. Driving at night in the hills is never a good decision. Driving over a pass, Namik La, at night is suicidal. Fortunately nothing untoward happened and we managed to reach Kargil around 11 at night. Topped up our tanks at a gas station just outside Kargil and the owner told us to look for a place to sleep around the city bus stand as at that hour, the bus stand would be the only place with some human activity.

Kargil is a convenient halt for all tourists and locals heading from leh to srinagar or the other way round. The vehicles start at night from Kargil and reach their destination early in the morning. We found a small dhaba open and while some of us had dinner, the rest went around to search for a place to sleep. We, fortunately, found a small hotel and slept away to glory after what had been an incredibly long day.