The trip was coming to an end and we were both sad and happy about it. Happy because we’d finally be back to civilisation, to our families and sad because, lets face it, we were having way too much fun.

We got up early and since the plan was to reach srinagar by afternoon, we had to be quick. We tied the luggage to the bikes, made a few quick calls back home to let them know we’re safe. Kargil was the hotbed of activity during the Indo-Pak war in 1999, otherwise known as the Kargil war, and our families back home were rightfully worried when we didn’t get in touch at all after leaving Leh.

Kargil is a major military base and the town has Army presence all over. There are points in the town where the enemy (Pakistan) posts are visible and signs like the one below have been put up to warn visitors of the presence of the Pak army. 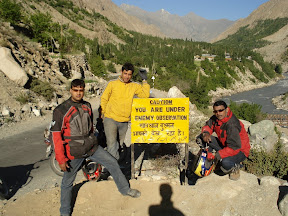 We had decided to stop for breakfast at a place called Dras, about 50 kms from Kargil. Dras is believed to be the second coldest inhabited place in the world, based on the temperature recorded on 9th Jan ’95, -60 degrees centigrade. 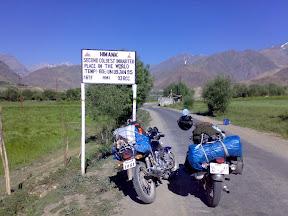 We had a quick breakfast at Dras and moved on. The ascent for the Zojila pass starts soon after Dras and the roads were nice and smooth, that is till the actual climb started, and Apjoo even managed to take some time out to pose with some local kids 🙂 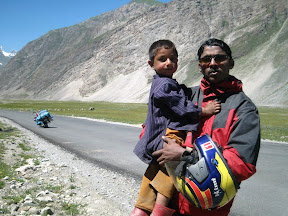 As for the actual pass, the road was almost non existant and it looked like the BRO was trying to make this into an all weather road. They were making the new roads with square blocks of stone which hopefully would be able to withstand the harsh winter that Zojila pass sees. The Zojila pass stands as the entry to the Kashmir valley and lets the valley retain a distinctive green color all year round which is very different from the rugged moonscape of the other side.

The Zojila is also a very important pass for the Indian Army since this serves as the gateway to the Dras/Kargil and Leh regions from the Kashmir side. During the Kargil conflict the Pakistani Army tried to capture points overlooking the highway which runs over this pass and onto Dras and Kargil as that would have meant essentially blocking the supply of essential goods to this region and eventually taking control. The Indian Army, of course, managed to win back all the positions and is now stationed at all the high altitude posts all year round. At Dras, the Indian Army has built a monument dedicated to the memory of the soldiers who fought and laid down their lives in the Kargil conflict. The memorial is built on a piece of land just outside Dras, and in the shadow of the Tololing and Tiger hill ranges which saw a major part of the Kargil conflict. 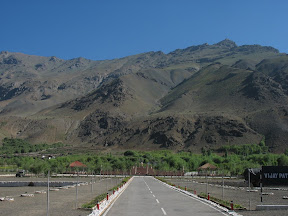 The Zojila pass as has been mentioned before is a strategic pass for the Indian Army and we were not allowed to stop at the top of the pass for too long, nor were we in the mood since, despite the beautiful scenery, the stone road was taking a toll on us. We kept moving stopping only for a couple of pics and that too without getting off the bike. As soon as you cross over Zojila, the scenery changes quite dramatically. The barren land gives way to a lush green valley. 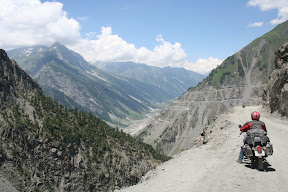 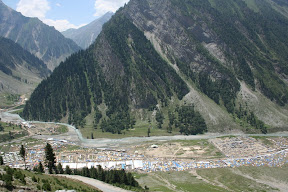 After we descended Zojilla we were caught in a stream of traffic either coming from Srinagar to the basecamp or going from the basecamp towards Srinagar. It was quite a challenge for us to navigate through this traffic since we had become used to just the 5 of us on road for miles with not even a human in sight.

We had a light lunch at a punjabi dhaba at pahalgam and then stopped only at Srinagar which was about 70kms from Pahalgam. Srinagar came across as just another small Indian city growing at a feverish pace, with no respenct for the architecture or aesthetics of the city. It is quite sad to see a lovely town like Srinagar being spoilt by all the developement taking place, but I guess its a good thing for the people of the city since development is what would bring tourism and the much needed revenue to this poor state grappling with Pakistan sponsored militancy since the last decade.

We stayed at the BB cantt. at Srinagar and let me tell you, I’ve seen a lot of secure cantonements in my time, but this one takes the cake. The place is a fortress. Even though we were supposed to stay inside the cantt and knew people inside, we still had to go through all the security procedures which included sniffer dogs, bomb squads and the works. It took us almost three hours to get in after depositing our mobile phones, cameras and any other objectionable stuff that we had. I was pretty impressed with the security arrangements.

We ended the day with a nice contenental dinner and a bottle of chilled beer.