The gates open at around 7 in the morning and there was no point getting up before that, so we had a good sleep and got up at our own sweet time. Got out of the cantt, after collecting our cameras and mobile phones which had been deposited at the main gate, and started on towards the city to get petrol for our bikes. Bikes tanked up we started towards the Dal lake and stopped there to take a couple of quick shots. 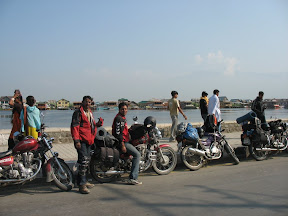 Amar wanted to stay back for a couple of hours and visit a couple of local touristy places and so we all bade farewell and started on our journey out of the chaotic but charming city of Srinagar.

The traffic out of Srinagar was nothing that we had imagined it to be. There were cars, trucks, motorcycles and humans everywhere and on top of that, there was an Army convey which was in front of us. The Army convoy didn’t let us overtake them and in fact, one of the soldiers even pointed a gun at Pandey when he tried to overtake the convey. The look on Pandey’s face was quite hilarious after that incident 🙂

The convoy took quite some time to get out of the Srinagar traffic even when all the traffic was virtually stopped for it to pass. Once we were out of Srinagar, the convoy let us overtake them and after that, it was just us and the open road in front of us, all the way till Pathankot. Well, not really, we had lots of smoke spewing trucks, taxis and buses for company and of course, so many armed soldiers deployed every 50 mtrs that it was almost spooky.  For breakfast/snacks, we stopped at one of the umpteen free food stalls put up for the amarnath yatra devotees.

The road was nicely paved all the way till Udhampur and we easily reached Patnitop in time for Lunch, but since the only dhaba open for lunch didn’t look inviting enough to some of us, we decided to move further and stop for lunch at Kud.

The whole time we were playing a game of cat and mouse with the Army convoy and trying to stay ahead of it, since getting behind the convoy would have meant losing a lot of time again, which we couldn’t afford. The convoy finally left us at Ramban and after that we did an almost non stop run till Udhampur where we reached around 4pm.

Instead of entering Udhampur city (which btw was where I completed my 12th standard) we took the bypass road which took us through some lovely countryside. 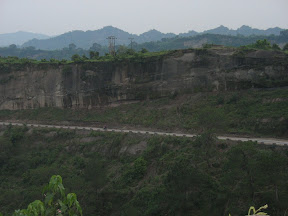 But, of course, we couldn’t have reached Pathankot without us mishap ! Apjoo’s bike had a puncture but fortunately, there was a mechanic’s shop closeby who unfortunately didn’t have all the tools with him. So, we had to take the tyre off the bike and take it to another puncture shop a little further down the road.

By the time the bike was fixed, it was quite late, but having taken this nice country road, we were actually stuck and our only option was to keep moving and try and reach pathankot any which way. We reached Pathankot around 10 at night and found the place where we were supposed to spend the night and slept away to glory. This had really been a long day, like almost every other day of this journey.