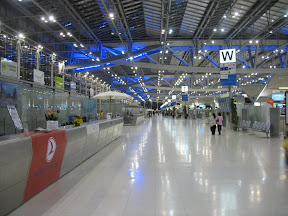 Suvarnbhumi international Airport opened late in 2006 and has been catering to the huge air traffic that Bangkok gets each year. Suvarnbhumi is by all standards one of the biggest airports in the world and coming from an Indian airport it was actually intimidating as I stepped out of the Aircraft into the huge terminal. Ok, Maybe that’s exaggerating a bit, but you get the drift. The aiport is huge, modern, clean and easy to navigate, unless you get tired walking the kilometer or so of duty free shops. Thankfully, the airport has moving walkways.

Thailand has a visa on arrival facility for Nationals of certain listed countries, including India, China, Bhutan and 17 other countries. The complete list of countries is available here. The airport is well marked and all signs are in Thai as well as English and it wasn’t difficult to navigate around the airport for us. This was in contrast to the Kuala lumpur international airport where we were lost for the first 30 minutes as all signboards were only in Malay. I found the arrival experience at Suvarnbhumi much better than KLIA.

We took the visa on arrival facility and it took us less than 30 minutes for the whole process. The forms are available free of cost and they even have sample forms filled in and pasted around so that a first time visitor would have no trouble in filling the forms. The forms themselves are pretty simple. You need two recent passport size photographs and, apparently, 10000 bt per person cash or 20000 bt per family. But, we weren’t even asked if had the money with us. I’m assuming this was because we already had hotel reservations and a return ticket. We, of course, had taken the money with us anyway, and you should too, just to be safe. There is an ATM machine and also a money exchanger next to the visa on arrival facility. I’ve heard that it can at times take upwards of 2 hours to get a visa but it was a smooth affair for me. 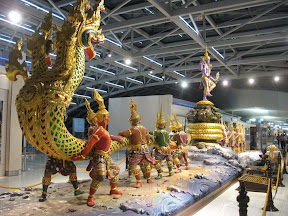 The aiport has an excellent duty free area. A kilometer or two of shopping madness. It actually looks like a small mall. The food, though, is a bit expensive. We paid 340bt for a sandwitch, coffee and a croissant, none of which were worth raving about, but we had the food anyway since we were quite hungry.

The airport is about 35 kms from the city and to get to the City, you basically have three options.

Out of these the 3’rd option is the cheapest but also the slowest and since I have no experience taking a bus out of Suvarnbhumi, I won’t talk about it.

Out of the other two options, both are essentially taxis but taking a limousine would be much more expensive. The taxi counters inside the airport just before the exit are pre-paid counters and thus, more expensive. We asked the airport helpdesk for directions to take a metered taxi and they were glad to help us. We also picked up a freely available Bangkok map from the helpdesk which proved quite useful.

The metered taxi stand is on your left as you come out of the aiport on the approach road. It would be helpful to have the address of your hotel written in Thai. Try and get that from your hotel before coming since most taxi drivers don’t know English. Just show the hotel address to the person at the counter and he or she’ll direct you to a waiting taxi and you’re done. It can take anywhere from 45 mins to an hour and a half to reach the city center from the Airport, depending on the traffic.

Ask the driver to take the toll way as its much more convenient and faster. You will have to pay the toll charges, which are around 40bt at the first gate and 20bt at the second gate. Since, we were staying a bit away from the city center (Close to Sanam Pao BTS Station, Abloom Serviced apartments), it cost us about 300bt to reach our hotel but the driver was helpful and we had give him the hotel address in Thai so it was easy for him to find the hotel.