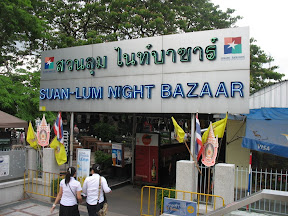 Suan Lum night bazaar is a market in Bangkok’s Pathum Wan district, at the intersection of Rama IV and Wireless/Sathorn Roads, opposite Lumpini Park at the Bangkok Metro’s Lumpini Station.

This is the swankier and more expensive cousin of the JJ weekend market and is open throughout the week from about 6 in the evening to 12 at night, although some shops are open well past midnight. The shops are in general slightly more expensive than their JJ market cousins but the ambience of the place is also much better. If you’re a guy travelling in Bangkok looking for bargains, you’d find this a much better place to shop. Of course, you should be able to bargain hard.

One of the shopkeepers quoted Bt 800 for a handbag, for example, which my wife bought. She asked him to give it for Bt 300 and he agreed, in a flash ! Only later, when we went to the JJ market, we realised that the same handbag was available for Bt 200 there. That’s Bangkok for you 🙂

Apart from shopping, the night market offers dining also with almost all world cuisines represented. There is also a huge beer garden which usually has some kind of live musical performance going on. 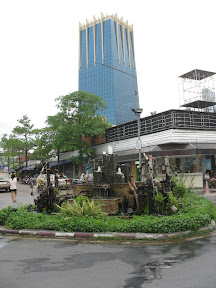 My favourite place in the whole market was the beer garden, of course. Cheap beer and nice thai food make for a formidable combination. If thai food is not your cup of tea (or a bowl of tum yum) there are restaurants serving Italian, Indian, mexican and english food also. 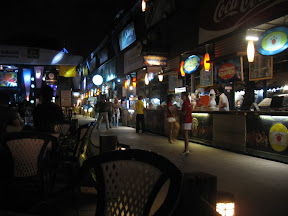 There were rumours of the Market being shut down and giving way to some malls and apartment complexes. That hasn’t happened till now and considering how popular the market is, I don’t think that’ll ever happen.

Bottomline, if you’re in Bangkok, do make it a point to come here and enjoy the night instead of getting wasted at one of the shady night clubs on Silom road.