Sharninder: A different perspective on our trip to Bangkok, by my wife. Well, as you can see Shopping was (and is) on the top of her list and that is why I have a seperate post on shopping in Bangkok. So, without further ado, here it is …

After years of yapping, planning & cribbing about the shoes, bags, belts, T-Shirts that I wanted to buy in Bangkok…this year I finally went there.

Well! There is a reason why they call Thailand the land of smiles. It is difficult for anyone (esp. women) to not smile when one can shop till they drop and still have things they haven’t explored yet & money they haven’t spent yet. But to my surprise, shopping is NOT the only thing worth mentioning about BKK (although I’ll keep mentioning it again & again :)). It has lots of other goodies – Authentic tourist hot spots (The Grand Palace, Wat Pho), Thai Foot massage, Food & Drink (street food & beer gardens), Creative window display at Malls, colourful cabs, awesome tuk-tuks, the life saver BTS, weirdest of weird hairstyles & of course the buzz of ‘Swadee-kha’.

We did the obligatory tourist attractions like the Grand Palace & Watpho. Let me tell you a few of my favorites…. 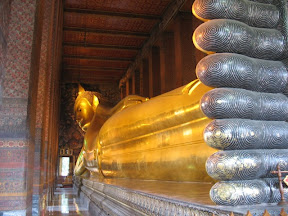 Temple of the Reclining Buddha (Wat Pho), the sheer size is magnificent and the nacre feet a real sight to see. The temple is quiet with a ting-ting noise of bells similar to what we hear in our Indian temples. The interesting thing is that it’s not the sound of bells, but of coins dropping one by one into a line of metal containers against the back wall. Another comparison- there were 108 containers which represent the 108 good things on earth!!

Temple of the Emerald Buddha (Wat Phra Kaew) is located on the ground of the Royal Palace in Bangkok. It is the most revered Buddhist shrine in Thailand. Keeping in line with the palace the shrine has beautifully carved Royal Guards all around. Inside the shrine, in the centre resides the Emerald Buddha, a dark green statue standing about 2 feet tall. The Emerald Buddha itself is simply the jasper statue and is adorned with garments made of gold. There are three different sets of gold clothing correspond to Thailand’s hot season, rainy season, and cool season. 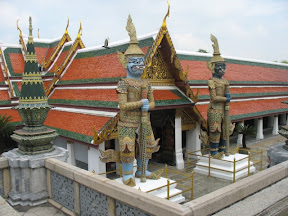 The Grand Palace. The architecture at the Grand Palace is a union of the old and the new (by which I don’t mean glass towers). Within the palace complex are several impressive buildings, Stupas & temples. All around the complex is a gallery, with paintings depicting the history of Thailand & the various Kings. They have been beautifully preserved & the restoration work is always in progress. The main buildings are colorful & intricately carved & decorated with gold and glass which literally dazzle in the sun. It was an interesting, fun trip… but it was just toooo hot!!! Another interesting note, there is a dress code for to enter The Grand Palace. No sleeveless, no shorts – you get the drift.

Shrines – It’s often a custom in Bangkok to build an accompanying shrine to a large new building or development, to promote good fortune and ward off bad luck. The Erawan Shrine is one of the best known but in fact they are all over Bangkok; some are more noticeable than others, though.

Wait for the next part of the series, Part 2, on shopping in Bangkok, from a lady’s perspetive 🙂